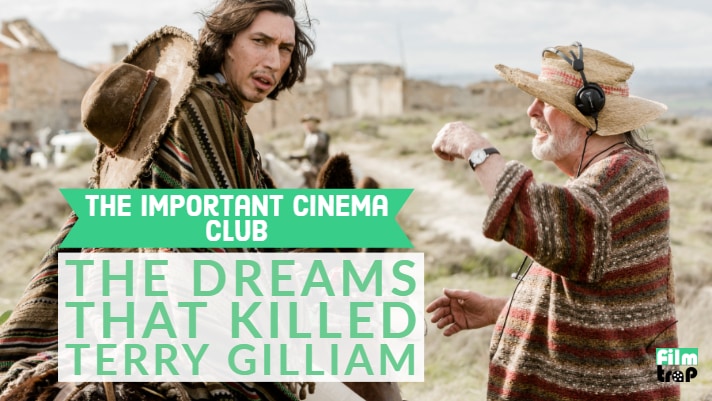 We discuss the career of Writer/Director Terry Gilliam and his films JABBERWOCKY, BRAZIL, THE ADVENTURES OF BARON MUNCHAUSEN and THE MAN WHO KILLED DON QUIXOTE.

Become a Patreon subscriber NOW for $5 a month and get an exclusive episode every week! This week on our Patreon we watched MONTY PYTHON’S HOLY GRAIl.

Low-level bureaucrat Sam Lowry (Jonathan Pryce) escapes the monotony of his day-to-day life through a recurring daydream of himself as a virtuous hero saving a beautiful damsel. Investigating a case that led to the wrongful arrest and eventual death of an innocent man instead of wanted terrorist Harry Tuttle (Robert De Niro), he meets the woman from his daydream (Kim Greist), and in trying to help her gets caught in a web of mistaken identities, mindless bureaucracy and lies.

Jabberwocky is a 1977 British fantasy film co-written and directed by Terry Gilliam. It stars Michael Palin as a young cooper who is forced through clumsy, often slapstick misfortunes to hunt a terrible dragon after the death of his father. The film’s title is taken from the nonsense poem “Jabberwocky” from Lewis Carroll’s Through the Looking-Glass (1871).

The film, Gilliam’s first as a solo director, received a mixed response from critics and audiences.

The Man Who Killed Don Quixote is a 2018 adventure-comedy film directed by Terry Gilliam and written by Gilliam and Tony Grisoni, loosely based on the novel Don Quixote by Miguel de Cervantes. Gilliam unsuccessfully attempted to make the film many times over the span of 29 years, which made it an infamous example of development hell.